Italian Rapier Fencing – The Art of the Duel

Posted by fortezafitness on September 10, 2012 in Italian, Rapier

Rapier fencing was the first truly “civilian” system of fencing, maximized for single combat and meant to be used without either any secondary arms (although their use continued for quite some time) or protective armour. Originating in Italy, rapier fencing spread throughout Europe, where it developed into several unique forms, most notably in Spain, where an entirely unique method of rapier fencing persisted until the early 19th century.

In the “chicken and egg” question of rapier evolution, the origin of rapier fencing can be traced to a change in tactical focus. A greater emphasis on unarmoured, civilian dueling led to changes in the technical elements of the old Bolognese School. In 1553, the architect-turned-fencing theorist, Camillo Agrippa, best expressed this evolution in his Tratto di Scienza d’Arme (Treatise on the Science of Arms) by placing an emphasis on the thrust, and reducing the many guards of the old Bolognese system to  those four that best kept the point constantly in play. As the thrust moved on the straight line, Agrippa reasoned, it was the shortest, and fastest way to strike the adversary, and a guard that kept the point forward also kept the opponent at bay.

This emphasis on the thrust and guards that presented the point led to further innovations, or refinements, in how the sword was used, all of which were in place by the year 1600, when the art of “rapier” fencing was fully developed, and articulated by Nicoletto Giganti (1606), Salvatore Fabris (1606) and Ridolfo Capoferro (1610). In this new method, since the point was always presented toward the opponent,  it became both weapon and shield for the swordsman, thus the sword side of the body was always presented toward the opponent; even when using a companion arm, such as the dagger or cloak. These changes in tactics also brought a change in footwork, which now focused on small, advancing steps, either like that in modern fencing, or “gathering steps” where the rear foot steps up to the front foot, and then the front foot steps forward. Advancing steps had already long been a part of Italian swordsmanship, but had been subordinated to the pass. Now those roles reversed, with the pass being relegated primarily to a swift way to deliver an attack to the outside line, to grapple the opponent, or swiftly retreat out of measure.  But the most  important piece of footwork to evolve in conjunction with the rapier was what Ridolfo Capo Ferro called the passo straordinario, more commonly known as the botta lunga or lunge. The lunge is a fast, powerful attack to reach your opponent from a distance. Beginning with an extension of the arm, the left foot was lifted slightly off of the ground and kicked forward into the air, using the back foot to propel the swordsman forward with great speed, driving the thrust forward with great power as the fencer’s limbs align with the weapon like an arrow shot from a bow. With a strong retraction of weight onto the rear leg, the swordsman could then instantly recover back into guard.

Although the rapier was occasionally still taught with buckler and shields until well into the seventeenth century, it was generally used either alone, or in conjunction with the sidearms a gentleman would most likely have with him at all times, the cloak and dagger.

In his Lo Schermo, overo Scienza d’Arme (“On fencing, or the knowledge of arms”), the Paduan swordsman Salvatore Fabris (1544-1618) presented a detailed yet concise, and surprisingly modern explanation of the guards, measure, tempo, strengths and weaknesses of blade-sections and blade-angles and line, combined with a vast technical repertoire for using the rapier alone, and in conjunction with both the dagger and the cloak.

Throughout his work, Fabris’ preference is for actions made in tempo. This means that he seldom advocates parrying and riposting as two consecutive movements – rather, he executes them both in one motion, i.e. in a single tempo. The resulting style, once mastered, is extremely hard for an opponent to defeat. Arguably, Fabris became the most internationally-celebrated teacher of the new style. The roster of his princely pupils included the Archbishop of Bremen and Christian IV, King of Denmark, under whose patronage he published Lo Schermo.

Fabris’ manual became an instant-bestseller around European fencing circles; it was re-printed continually from 1606 to 1713, translated into several languages, imitated and even plagiarized, as Fabris’ style spread throughout the continent, and seems to have dealt the death blow in German lands to the venerable Liechtenauer Tradition. 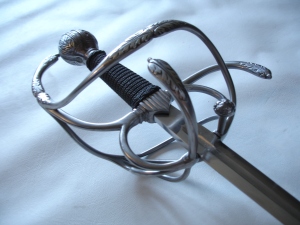 Once this new method of fencing was born, the sword began to adapt to fit the method’s ideals. The rapier was a weapon in almost constant evolution from its birth in the mid-16th century, until its gradual replacement by the smallsword in France, England and Germany at the end of the seventeenth century, and the spada da terrena (dueling sword) in Italy during the waning years of the eighteenth. Generally speaking, a rapier is a long-bladed sword with a complex hilt, optimized for the thrust but still capable of debilitating cuts. The blade is fairly thin and stiff, and counter-balanced to provide greater point control. Rapiers were neither light nor flimsy; a typical rapier of c.1600 had a blade of 42″ in length, a weight of 2.5 – 3 lbs, and was capable of parrying the blows of broad-bladed military swords, including the now old-fashioned longsword. The rapier’s swept hilt was a direct inheritance of the innovations made to the arming sword at the turn of the 16th century, and this in turn was replaced by the cup-hilt in second quarter of the 17th century.

For more information on other styles practised by CFAA members, visit the Traditions page.