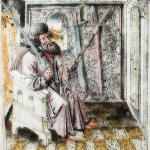 The only known illustration of Johannes Liechtenauer from the “von Danzig” fencing treatise.

There were many fencing traditions that were recorded from medieval Europe, but perhaps one of the most prolific traditions is that of the German master Johannes Liechtenauer. We know very little of the man himself, save that he probably lived in the 14th century, and was a fencing master lauded by students of his art centuries after his death. His Kunst des Fechtens, or “Art of Fencing”, taught hand to hand weapons covering combat on foot, on horseback, and both in and out of armor. Various masters of his fencing tradition who lived long after Liechtenauer’s death wrote fencing treatises that dealt with self defense, war, dueling and even friendly competitive sport. These treatises taught fighting with the arming sword, sword and buckler, quarterstaff, poleaxe, dagger, unarmed, the langes messer (long knife), spear, exotic dueling shields with maces, and an entire panoply of other weapons. Perhaps the weapon most famous of the Liechtenauer tradition in the modern world is the use of the two handed longsword, which seems to have formed the core curriculum of his teachings, giving the basic actions that would lead the way to learning all of the weapons of the art.

While we may not know much about Liechtenauer himself, there was a long list of fencing masters that taught within his tradition. Many of the fencing treatises by these masters refer to a strange poem written by Liechtenauer, known as the Zettel (epitome) or the Merkeverse (teaching verse). This bizarre set of rhyming verses contains mysterious comments that would be considered gibberish to outsiders of the art, but was in fact a mnemonic device to preserve his teachings long after his death, yet keep the art a secret from the uninitiated. Had it not been for the fencing treatises that later decoded it, which span at least from the 14th into the 16th centuries, then this art would have died with no hope for revival by modern practitioners.

Because of the large time span of these German fencing books, there are variances of specific actions within the tradition. Certain masters used different names for guards and techniques, and other masters even added new material to the general teachings. In fact, some masters reprinted the original Liechtenauer zettel differently from others, making small additions and omissions. Despite this, the core material stayed relatively the same throughout the lineage, and due to the large amount of surviving texts, this tradition has become one of the more popular styles practiced in the modern revival of Historical European Martial Arts.

For more information on the traditions practised by CFAA members, visit our Traditions page.